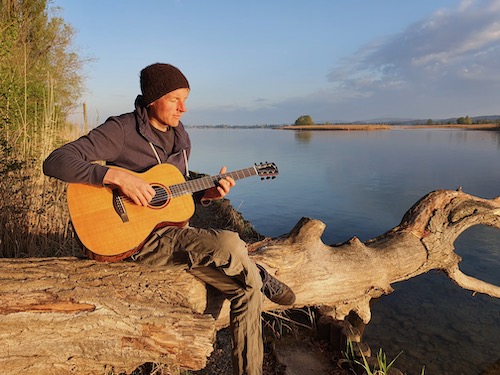 Martin Schlögl is a versatile musician from Germany. His compositions are vital deep dives, often humorous inviting the listener to reflect and sense the music on deeper levels. Depending on the song he writes his lyrics in German, English or Spanish. And sometimes the music is purely acoustic and speaks for itself.

His main instrument is the acoustic guitar while other instruments like the handpan, a West African hunter’s harp called n’Goni, the body by body percussion decorate his songs and especially vivid live concerts. His enthusiasm for rather extra-ordinary instruments along with the guitar turned him and his music into a world musician over the years.

Martin is a classic career changer. He encountered music as all of his previous attempts to keep up with a job for more than 2 years failed as there was no long-lasting joy and purpose in what he did. Music made exactly that for him: it makes him happy and he has the feeling to do something good and meaningful.

His motto „Trust and Devotion“ is a key component of his music and his life. To trust in himself and to devote to his inner abilities and thereby to feel and be as alive as possible.

In 2012 he founded the music project “Xumbalu – The Play of Music” https://en.xumbalu.de where most of his musical creations take place. Within Xumbalu he also conducts body percussion workshops, composes individual music (“Your song”) and even plants trees (“Musical tree planting”).

In 2020 his album „Trust and Devotion“ was released.

For more than 20 years he has been supporting two Bolivian school projects collecting donations for guitars and looking for local music teachers.

We know that anything is possible.

We devote ourselves to life.

We love the extra-ordinary.
We enjoy life.
We are courageous.
We find the real world to be much more important than the digital world.
We ask ourselves: Who needs a rearview mirror?

We love the game of life!

proudly made in Bavaria by Maple Marketing GmbH
Imprint | Privacy